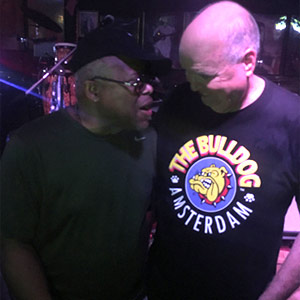 Mark has been playing music his entire life. His father is a member of the Florida Bandmasters Association Hall of Fame and his mother plays piano and composed the Alma Mater for his high school. “The Allman Brothers Band is the soundtrack of my youth and it’s a dream come true to be playing with musicians who love them as much as I do,” says Mark. He played professionally for many years before getting his law degree but music is, and always will be, Mark’s first love. Mark also wants everyone to know that thanks to Tribute – a celebration of the Allman Brothers Band, his daughters finally think he’s pretty cool. 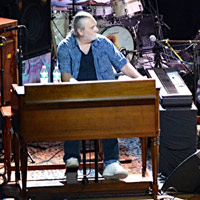 When Atlanta native Henry Davis got the call for a shot at the keyboard spot with Tribute he phoned his brother and fellow musician to say that the time had finally come for a chance to play Allman Brothers music with musicians who really understood it and knew how to play it. His brother was emphatic – this was undoubtedly meant to be. The music of the Allman Brothers Band has always been a special focus for Henry and thru the years he has continued to add song after song to his repertoire. “All of my musician friends in Georgia either learned or tried to learn whatever Allman Brothers songs they could. A band could hardly get thru a night without passing that test. Sure, there’s other material that holds my interest but nothing feels like home as much as the Allman Brothers. Getting together for a night with Tribute brings more than memories – it’s like reconnecting with something very special”. 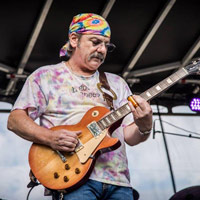 Larry Griggs’ family moved to Macon from Atlanta in 1969 when he was 13, a few months after the Allman Brothers Band relocated there. Growing up in Macon, during the glory days of Capricorn Records, it was no coincidence that he then began to seriously pursue the guitar. The music of the Allman Brothers Band, as well as other Capricorn recording artists, had a huge impact on his playing. But, after finishing school, he drifted from the instrument for some 30 years until his son suggested he pick it up again. Soon, a Craigslist ad led him to Tribute – a celebration of the Allman Brothers Band. “It was like fate had tapped me on the shoulder”, he said. At 57, he feels like he’s 17 once more, playing the music he loves all over again. 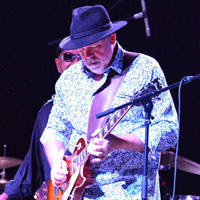 It was a musical family. Rod Gunther’s father played the banjo and his mother dreamed of singing with a Big Band. His brothers were 10 and 11 years older; so, at a very young age, Rod was exposed to their record collection and all the amazing music from the ‘60s. He would strum along on a tennis racket while Beatles albums played from their bedroom. His first real guitar came at age 13 and he put his first band together at 15. From that point on, being in a band is really all he ever wanted to do. Growing up in Melbourne, FL, he discovered and fell in love with the Allman Brothers in 1972, only to find out that Duane had died the year before. He played his “At Fillmore East” album until every note was tattooed on his brain. Many years and many musicians later, Rod says, “I could not be happier to have found such a wonderful group of talented and dedicated guys to share my passion for music and love of the Allman Brothers with.” 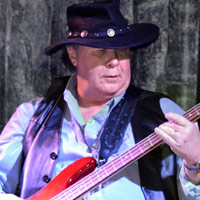 Chris has played or mixed sound for several Atlanta-based bands over the years, including Motion, Taxi, Oz, Sanzen, Tandem and Florida-based Eli, among others. He has played all over the Southeast. Whenever the Allman Brothers Band played for free at Atlanta’s Piedmont Park on Sundays back in the day, he was always there and up close. “I’m excited to be a part of Tribute ABB because I get to play music that I love and I know that these guys are as influenced by the Brothers as I have been,” he said. 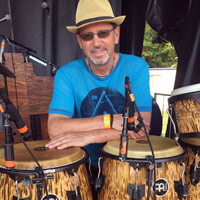 It began in the early 1960s in Hawaii with his first black Harmony electric guitar, sending John Marsten off on a half-century journey that has delivered him behind a set of congas for Tribute – a celebration of the Allman Brothers Band. He gradually learned to master that old Harmony, to his parents and neighbors’ dismay, and by high school, he joined his first band, playing venues throughout northern Virginia and the Washington, D.C., area. John continued pursuing live music with various bands until his current project. According to John, “Tribute: just plain magical.” 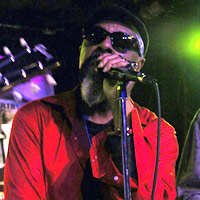 Growing up in a family of preachers and teachers in Charleston, SC, Oliver Nichols lived on A.M. radio, choirs and many musical groups. But, the front man for Tribute said he’s never witnessed a band that took every note, sound, and throw back-passion as seriously as this one. “As a child and as an adult, you always want to sing songs that you believe in,” he said. “It comes out better when you feel them. Tribute is the truth.”

Tom Stinson first saw the Allman Brothers Band, when they opened for the Grateful Dead at the Fillmore East in February 1970. He recalls thinking that the wrong band was headlining the gig. It was with some amusement that he read in his “My Cross to Bear” autobiography (page 147) that Gregg Allman was watching backstage and thinking the same thing. A veteran of the Pittsburgh music scene in his teens, Tom stored his drums for some 35 years before pulling them back out from basic curiosity. The internet search that led him to the folks that became Tribute was one of the most rewarding log-ins of his life.

TRIBUTE | a celebration of The Allman Brothers Band
↑